Andrew Merrigan first stepped into the world of creativity and storytelling as a dancer. When he was 3 years old, he asked his parents to put him in a dance school, and they obliged. He began his training at Casey’s Dance Centre in Edmonton, where he learned the fundamentals under Marie Casey. At 8 years old, he attended a tap dance master class with Bril Barrett, who was touring through Edmonton as the tap section of RiverDance. It was during this class that Mr. Barrett inspired Andrew to pursue tap dance more fiercely, jumping from studio to studio taking as many classes as possible, much to the chagrin of the competitive nature of Edmonton dance studios.

At 10 years old, with a dream of being a professional, Andrew became a member of Shelley’s Dance Company where he trained with instructors and choreographers such as Shelley Tookey, Stacey Tookey, Ross Brierton, and notable Edmonton-based tap dance instructor Gail Ledger. There, he trained and competed in Tap, Jazz, Lyrical, Ballet, and Contemporary. Andrew spent six days a week at the studio, studied and completed annual Al Gilbert syllabus tap and R.A.D. ballet exams, and performed in 20+ competitive routines annually. In 2002, he traveled to Riesa, Germany and competed as a member of Team Canada West in the World Tap Dance Championships. As Andrew began to mature as a dancer, his focus became more narrowed to tap. 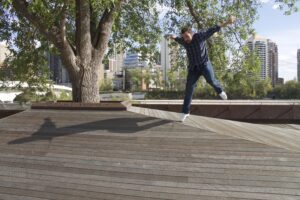 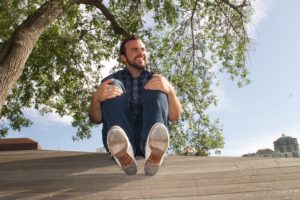 At age 16, Andrew continued to train with Gail Ledger at DanceFusion Academy of Dance in Sherwood Park. He performed exclusively as a tap soloist in local competitions and won numerous awards and scholarships. It was also at 16 that Andrew co-founded and co-produced Tap Into A Cure, a charity dance festival that brought tap dancers like Dr. Harold Cromer, Dr. Jeni LeGon, Jason Samuels Smith, Chloe Arnold, Danny Nielsen, and Sarah Reich to Edmonton. The festival ran for five years, and featured a week of classes and a celebratory show at Festival Place in Sherwood Park. The festival raised over $40,000 for local charities across five years. The festival also brought Hip Hop Legend and Pioneer Mr. Wiggles to Edmonton. At age 18, Andrew performed a duet alongside Vaudeville and New York City Legend Dr. Harold “Stumpy” Cromer, becoming the first student to perform a musical theatre duet with him since 1949.

Andrew currently teaches dance in Toronto and around Ontario and hosts a monthly tap jam that proudly pays booked performers and musicians. It is currently on hiatus due to COVID-19. Andrew is available for performance, adjudication, instruction, and choreography.